Erdinger Ringschluss: Extension of the railway tunnel at Munich Airport 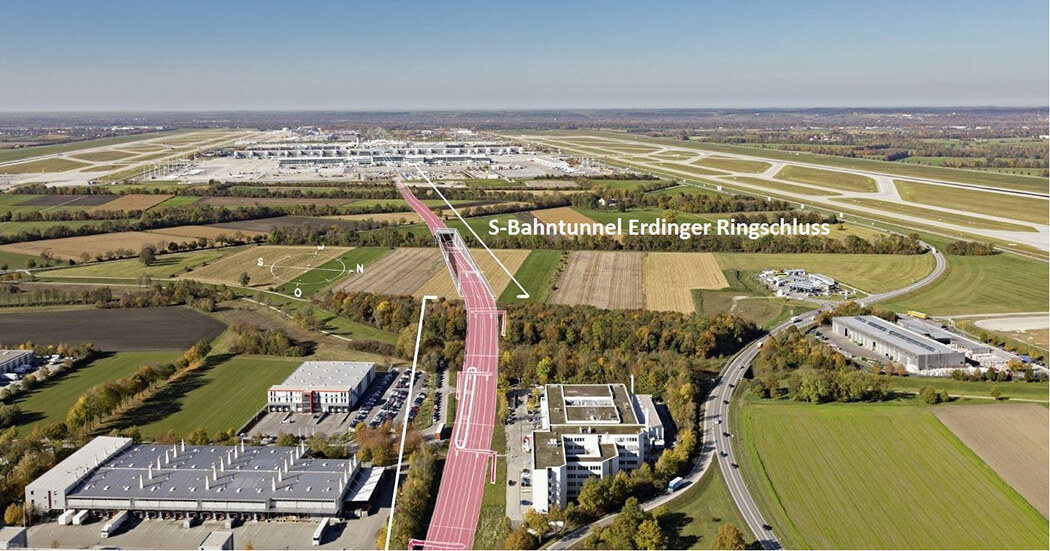 A vital public transport link for the north of Munich

The PORR GmbH & Co. KGaA / PORR Bau GmbH consortium extended the existing railway tunnel to Munich Airport, which terminates at the level of the Terminal 2 satellite to the east, to allow suburban light rail and other trains to pass through the airport. The tunnel structure, consisting of an approximately 1,555m-long tunnel and an approximately 306m-long ramp, is a milestone for the Erdinger Ringschluss circular rail link. This new railway line is projected to connect the cities of Freising and Erding by 2027 and will run underneath Munich Airport. The groundbreaking ceremony for the tunnel extension was held in September 2018, and the consortium completed the structural work on schedule in June 2021. The swift implementation was commended at an official event attended by high-ranking public figures.

The new railway tunnel is part of the first stage of the Erding construction project to close the gap between Munich Airport and Schwaigerloh. The 2-track section is about 4km long and is to be completed by 2025. The new tunnel structure has a clear width of 11m and stretches towards the east to extend the existing tunnel, which terminates at the level of the Terminal 2 satellite. The construction was commissioned by Flughafen München GmbH, who invested 115 million euros in the project. The Erdinger Ringschluss is approximately 26km long and consists of 3 construction stages: the Neufahrner Kurve, which was completed in 2018, the Lückenschluss Erding and the Walpertskirchener Spange. It represents an important link for suburban public transport north of Munich and connects the airport to the rail networks of north-east and south-east Bavaria. As a result, the time it takes to travel from Erding to the airport will be shortened from the current 40 minutes to less than 10 minutes.

A complex project on a tight schedule

Part of the tunnel structure was built using open-cut tunnelling and part using the cut-and-cover method. The works included three emergency exits and nine culvert structures, as well as the dismantling, restoration and technical fit-out of roughly 10,000m2 of aircraft operation areas. Some 50,000m2 of diaphragm walls, 80cm to 100cm wide and up to 20m deep, were constructed for the excavation pit. Underwater concrete floor slabs with a thickness of 1.40m were laid in the 18 excavation docks of the tunnel to seal off the excavation pit from the bottom. A total of 8,000m2 of sheet piling had to be constructed to secure the excavation pit for the 306m-long ramp.

The exceptionally tight schedule posed a particular challenge for all the PORR companies involved. First of all, around 250m of tunnel was built in the eastern runway area of the satellite terminal. Starting from the date the runway was closed, only nine months of construction time were available to build the tunnel and reopen the entire runway. The site manager of PORR Civil Engineering in Munich, Oliver Fürstmann, is very happy: "The cross-company cooperation with PORR subsidiary Stump-Franki Spezialtiefbau, the Pile Driving department and the Dewatering department has once again resulted in a virtually defect-free precision landing in this technically very challenging project."

Efficient supplement to rail traffic in the Munich area.

After completion, the planned suburban railway tunnel will be supplemented by an above-ground line including parking and turning facilities.