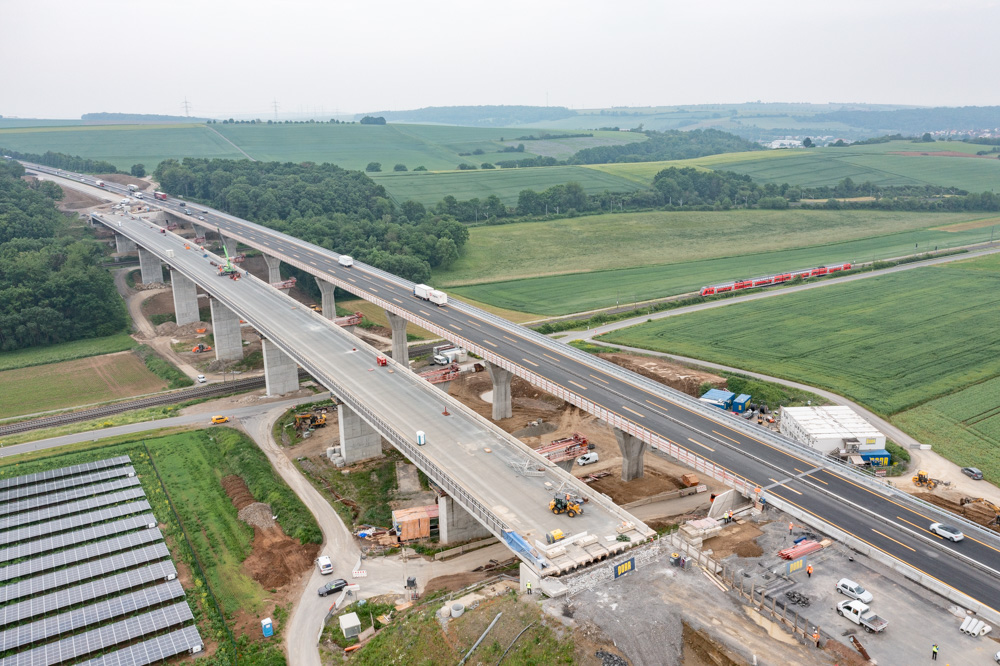 Construction of replacement Rothof viaduct on the A7

PORR Deutschland has built a solid construction replacement for the Rothof Viaduct in Lower Franconia, between the Würzburg-Estenfeld junction and the Biebelried intersection. The original structure was erected in 1965 as a single-piece composite steel cross-section; the cross-section of the new prestressed concrete structure is divided into two parts. The work included pile foundations, the construction of superstructures using the place and thrust method and the lateral launch of the 17,760-tonne second superstructure over 19.75m. The project is an example of demanding, high-precision bridge construction.

The A7 is the longest motorway in Germany and one of the most important north-south axes in Europe. The road surface and bridges need replacing in many places and the number of lanes have to be increased to 6 to accommodate the steadily growing volume of traffic. The damaged Rothof Viaduct, which spans the railway lines between Rottendorf and Würzburg, Fürth and Würzburg, and the communication road between Rothof and Rottendorf, was also dismantled by PORR between 2017 and 2021 and replaced by a new viaduct at the same location.

Separate 410m-long concrete box girders were constructed as a superstructure on both carriageways. In preparation for the 6-lane expansion, the lane width is 14.50m for each carriageway.

The superstructures were constructed using an approximately 36m-long launching nose by means of the place and thrust method over 15 increments with a maximum individual length of 30m. They rest on two abutments and seven bone-shaped pillar axes. The largest field spans are 60m and the column heights are between approx. 12.5m and approx. 25.5m. The new structure is founded on large-diameter piles with a diameter of 1.50m and lengths of up to 22m.

The final substructure abutment columns were subsequently erected for both carriageways and the second superstructure for Würzburg was constructed. Finally, the superstructure for Fulda, which was stored in a temporary replacement position, was launched laterally into its final position.

The Rothof viaduct before the transverse displacement of the left bridge element.

The left bridge element at its final position.