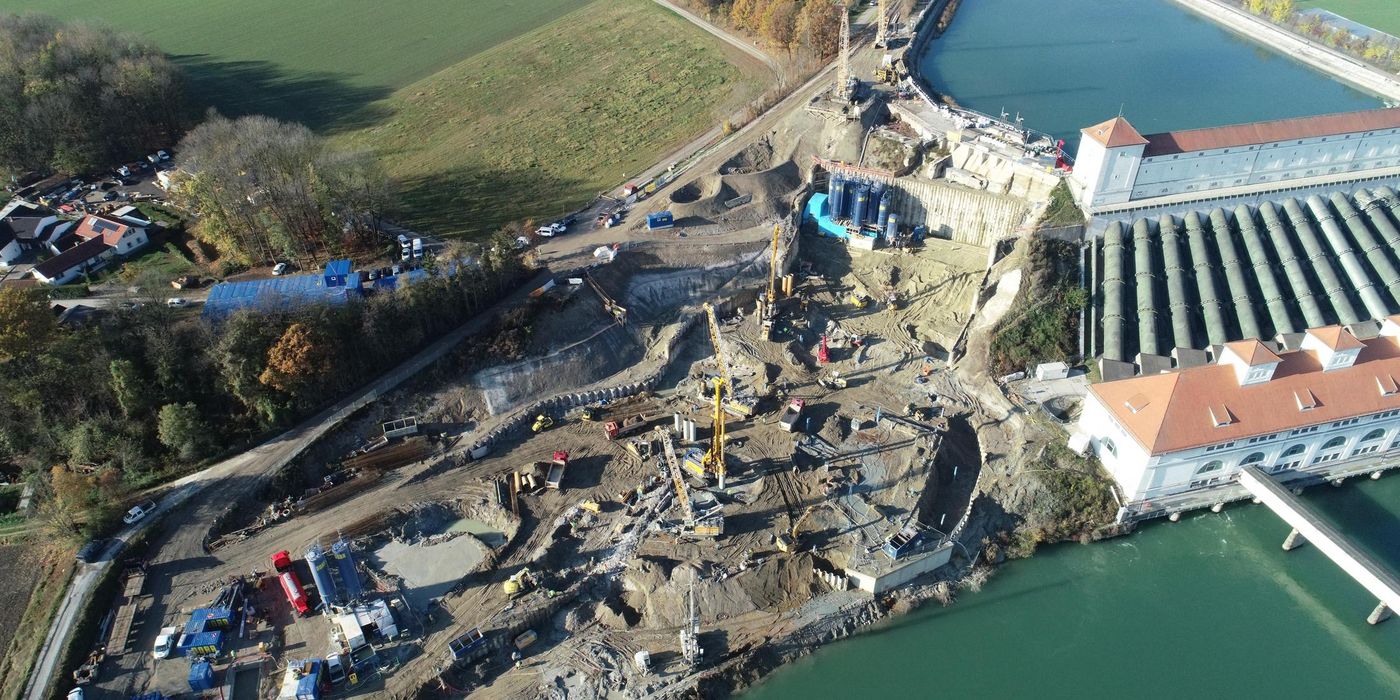 In Töging on the River Inn, a century-old listed power station is being withdrawn from the grid and replaced with a new building. Eight of the nine construction sections in the project were awarded to PORR. In total, the consortium is investing some 250 million euros in the scheme. Completion of the entire power plant is scheduled for mid-2022.

Local energy for the region
The new power plant is expected to yield a capacity increase of around 25 percent, generating enough electricity to cover the annual power consumption of around 200,000 households. The project is not limited to the new power station investment: the weir in Jettenbach is also being replaced with a new, more efficient model. So that more water can be diverted into the Inn channel, the maximum water level is being raised by 70cm. The Fraham and Jettenbach dams are being upgraded to improve the flood defences. The project has been carved up into nine construction sections, covering the improvements to the Fraham retention area, the Jettenbach weir, the channel enhancement and the new power station in Töging.

Eight of these, representing a total order volume of 150 million euros, were awarded to PORR, including the specialist civil engineering work for the construction pit.

Geological complications
The central element of the specialist civil engineering work was the main construction pit for the new powerhouse.

Due to the tricky geology of the site, PORR devised an alternative execution version while still in the tendering phase; it was this variant that won over the employer and was a major factor in PORR being awarded the contract.

Successful variant
PORR developed an alternative design in which the diaphragm wall was constructed as a one-phase wall. The key difference is that the bentonite suspension was replaced by a self-setting support fluid – a mixture of bentonite, cement, slag sand and blast furnace slag. With this method, the support fluid is kept in constant motion by the activity of the diaphragm grab, preventing the cement from setting.

Once excavation is complete, the cement sets to form a watertight, hardened wall in the subsoil. Since the sealing wall cannot serve any structural function, bored piles were built inside the sealing wall to take on the bearing function. This technique had already been tested for diaphragm walls up to 40m deep and excavation periods of up to 14 hours.

However, the diaphragm wall depth at Töging was 72m and the planned excavation period 24 hours. To test the procedure for feasibility under these conditions, large-scale tests were carried out in Himberg.

Continuous optimisation
Almost all areas of specialist civil engineering were involved in the central construction pit. The situation on the construction site changed constantly during the excavation, and the work had to be regularly adapted to new conditions.

PORR was able to introduce various additional optimisations while excavating the construction pit. For example, the original dewatering scheme used 100 dewatering wells, but we were able to implement it with just 60 wells.

Another improvement: the majority of the originally planned secant bored pile walls were replaced with spaced bored piling, secured with spandrels using the jet grouting method. This saved on both construction time and wear. An initially highly complex measurement system was also simplified thanks to PORR’s expertise.

Find out more about the project in the World of PORR https://worldofporr.com/en/1752020/toeging-jettenbach-power-station-replacement/

Shoulder to shoulder for success

Execution in Jettenback and Töging was carried out by a team of PORR specialists from various departments.