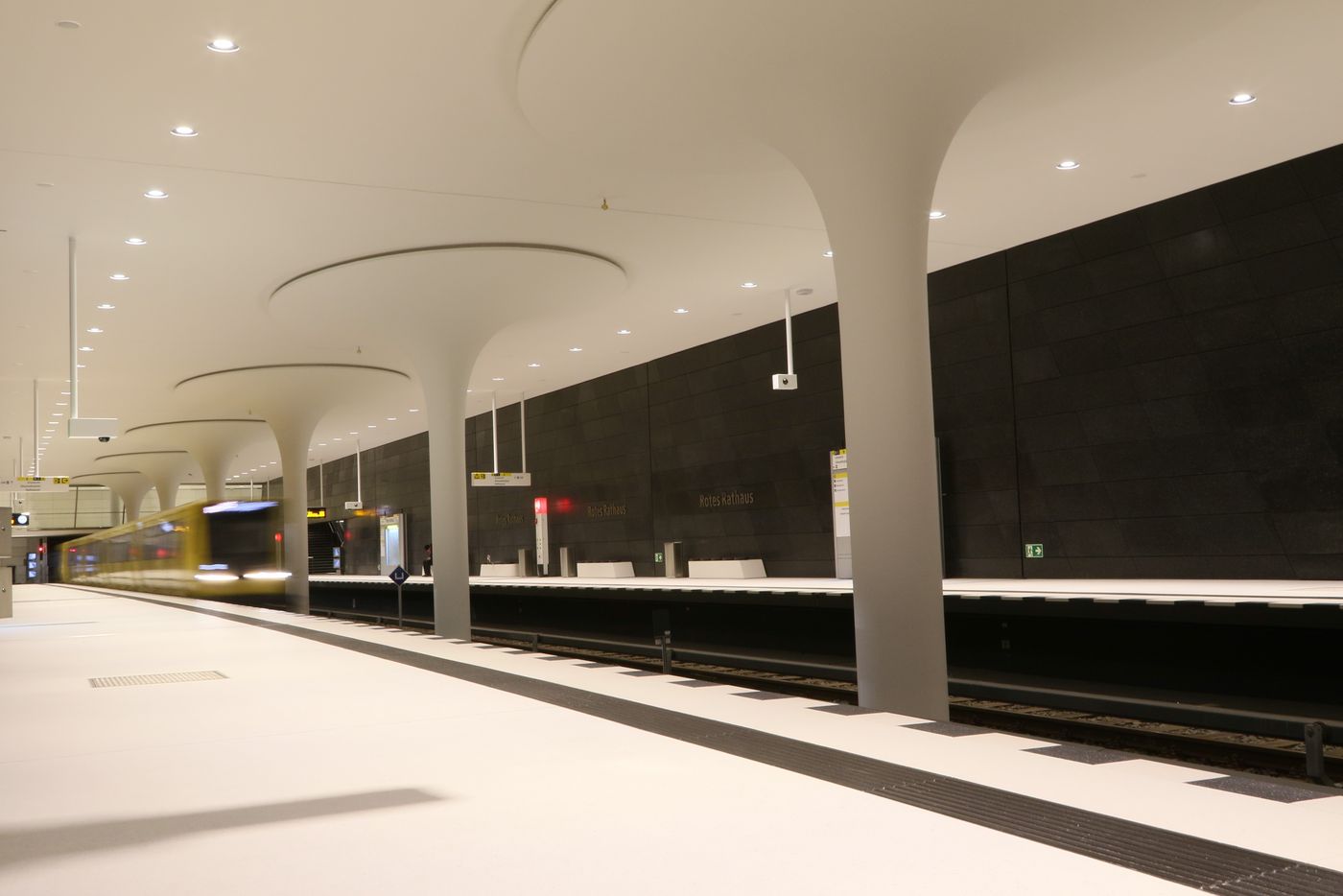 As part of the project Gap closure U5, PORR has renovated a section of four-track tunnel and extended the Rotes Rathaus subway station. New transport links for central Berlin are being created through the U5 Gap Closure project, which extends the U5 underground line from Alexanderplatz to the Brandenburg Gate, where it will connect to the U55. PORR joined the project back in 2013, commissioned by Berlin’s main public transport company, Berliner Verkehrsbetriebe, or BVG: between 2013 and 2016, we built the construction pit, the connection to the century-old existing infrastructure, and the carcass for the future Rotes Rathau” station. In April 2016, PORR was awarded the follow-on contract for general renovation of the four-track U-Bahn tunnel beneath Rathausstrasse; in February 2017 PORR also won the next contract, to extend the three-storey station Rotes Rathaus subway station.

The tunnel structure is around 15m wide, with heights varying from 4.7m to 8.9m, and 350m long. The top edge in this section is located approximately 3.5m below street level. This means that the structure is almost entirely surrounded by groundwater. The particular challenges in the project were managing the complex logistics and preventing buoyancy uplift due to the groundwater, as this would result in weak areas in the cross-section.

Some parts of the tunnels in the city centre were still in operation. In order to remain independent of the operative parts of the U-Bahn while delivering the heavy machinery and material, PORR erected two covered logistics shafts with crane access. We also established a physical separation from the operating U-Bahn areas, using a system designed in-house based on easy to relocate, dustproof longitudinal separating walls.

Tunnel core removal reduces the overall weight and disrupts the statics. The lower weight, combined with the tunnel’s location in groundwater, results in a risk of buoyancy uplift in the tunnel structure. This creates weaknesses in the cross-section, where there is a danger of cracks and water penetration. In order to reduce this risk, PORR used controlled ballast weights in the tunnel sections and used pressure-controlled presses for installing new or additional columns. The renovation was carried out using a back-and-forth process over 1.5m sections, and monitored carefully with survey measurements.

Next, slightly time-shifted, PORR began work on the extension to the Rotes Rathaus station in the neighbouring construction section. The new station, designed by architects Collignon Architektur und Design, stands out with unusual mushroom-capped columns and an eye-catching pattern of light and dark terrazzo tiles on the walls. The glazed mezzanine levels create a transparent effect, linking the top two public levels.

The extension includes both public and restricted areas of the station on storeys -1 to -3. The work involved traditional disciplines such as glazing, carpentry, metal construction, plastering and tiling, in parallel with work on technical systems for the lifts, ventilation, building automation, plumbing, fire protection and U-Bahn operation.

Find out more about the project in the World of PORR.

Berlin’s “Rotes Rathaus”, or “Red Town Hall” is the headquarters of the current Bürgermeister, the Berlin Chancellery and the Berlin Senate meeting venue. Below it, trains travel through the “Rotes Rathaus” U-bahn station.

© PRGU5
Print project
Back to overview