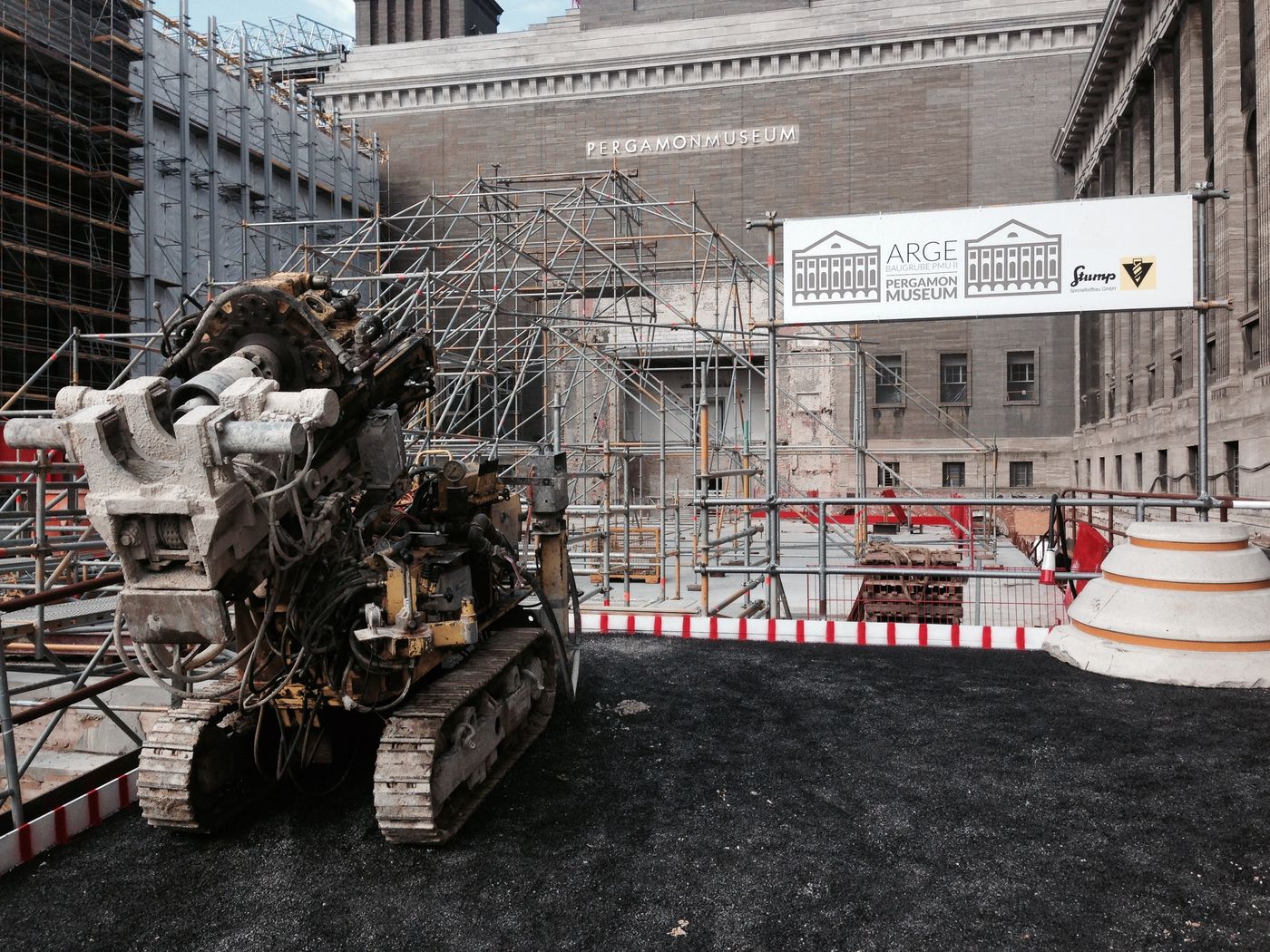 Construction in the existing structures at the Berlin museum island (museuminsel)

The general renovation of the Pergamon museum is the last large and remaining component of the museum island millennium project. At that time, as for today, the unfavourable condition of the construction site at the museum island represented a significant challenge for all of those involved.

As part of the Berlin museum island master plan, the Baugrube PMUII joint venture received the contract for execution of complex, specialised deep works in and underneath the Pergamon museum in July 2014. The Pergamon museum will be connected to the Bode Museum, Neues Museum and Alte Museum by an archaeological promenade. The museum will continue to operate throughout the whole construction period.

21 waterproof troughs are created and numerous underpinning works are performed using the jet grouting procedure during renovation of the existing foundation. The following was also required: complex exploration works of the existing structures, extensive low pressure injections with fine cement of around 970 micro piles up to 30 cm deep, water drainage work and demolition, excavation and steel construction works. All services are provided within the area of the specially protected building stock (UNESCO world heritage site). This sets clear limits in terms of drive technology and size, for the selection of devices. Permanent monitoring of the existing Pergamon museum is ensured by a comprehensive monitoring system throughout the whole museum. The construction site operation is characterised by a very restricted space with the corresponding logistical challenges, such as the simultaneous execution of the renovation, preservation and new construction work, and the construction operation and operation of the museum which is open to visitors running side by side.

Construction with existing stock is a particular challenge since the available planning documents for the existing structures do not always correspond to the real situation. This makes creating the waterproof excavations more difficult, and requires continuously adapted dynamic planning. In a subsection in which the new “Tempietto” entrance is located, deep obstacles were discovered which needed to be overcome for creation of a watertight floor, and this was very complex. The obstacles encountered have been overcome by using a drilling rig at a depth of 9.2 m. Since the services for the Tempietto were only originally possible with two tower cranes due to the surrounding development, a 40 m long steel temporary bridge was created for the construction of the drilling rig. The rig weighed 65 tonnes.

General renovation of the Pergamon museum during the normal course of business The collection of the Berlin Museum Island, with its five temple-style buildings, is famous all over the world and houses treasures from 6,000 years of human history. © STUMP

Pergamon museum pile manufacture, foundation 4. Sash The drilling of the micro pile foundation for the new construction in the 4th wing. Drilling depths up to 25 m deep in a double head procedure. © STUMP

Pergamon museum drilling at a limited height The foundation of the arch supports needed to be partially strengthened using fine cement injections. © STUMP

Pergamon museum material transport in difficult conditions. The construction operation is characterised by the very restricted space available, with the corresponding logistical challenges. © STUMP
Print project
Back to overview